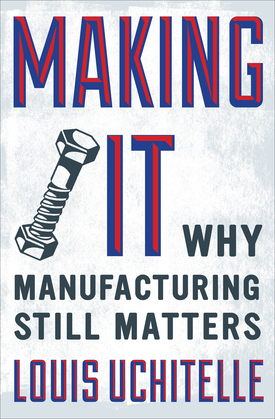 Making It: Why Manufacturing Still Matters

In the 1950s manufacturing generated nearly 30 percent of U.S. income. Over the past fifty-five years that share has gradually declined to less than 12 percent at the same time that real estate, finance, and Wall Street trading have grown. While manufacturing's share of the U.S. economy shrinks, it expands in countries such as China and Germany that have a strong industrial policy. Meanwhile Americans are only vaguely aware of the many consequences-including a decline in their self-image as inventive, practical, and effective people-of the loss of that industrial base. And yet, with the improbable rise of Donald Trump, the consequences of the hollowing out of America's once-vibrant industrial working class can no longer be ignored.

Combining brilliant reportage with an incisive economic and political argument, Making It tells the overlooked story of manufacturing's still-vital role in the United States and how it might expand.