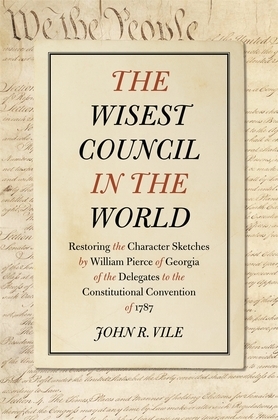 The Wisest Council in the World

Restoring the Character Sketches by William Pierce of Georgia of the Delegates to the Constitutional Convention of 1787
by John R. Vile (Author)
Buy for $44.95 Excerpt
Nonfiction Social science Political science Constitutions Law Public Constitutional
warning_amber
One or more licenses for this book have been acquired by your organisation details

Of all the written portraits of the delegates who attended the Federal Convention of 1787, few are as complete and compelling as those penned by William Pierce Jr. (1753–89), one of four delegates from Georgia. While at the convention or shortly thereafter, Pierce produced character sketches of fifty-three of the fifty-five delegates. Although widely quoted and cited, the sketches—until now—have never been analyzed or annotated in detail. John R. Vile’s study offers new insights into the workings of the convention and the character and roles of its delegates, as well as Pierce’s little-known life, which included time as an artist. Vile reveals, for example, that the time prior to the establishment of national parties when the framers could have successfully met together in convention may have been a relatively narrow historical window.

Following overviews of events leading to the 1787 convention and of Pierce and his immediate family, several chapters deal specifically with the character sketches. They cover Pierce’s arrangement of the sketches and their subjects, his evaluations of the delegates’ personal qualities and reputations, his assessments of their rhetorical abilities, and his descriptions of their public services, occupations, and miscellaneous matters. Two concluding chapters add further context. One examines a set of somewhat overlapping sketches that Louis Guillaume Otto, the French minister to the United States, penned about members of Congress in 1788. The other looks at writings by Pierce’s son and namesake that also include assessments of various Founding Fathers. Gathering Pierce’s sketches in full, with ample annotations and secondary materials, this is a valuable reference on Pierce’s life, work, and times.