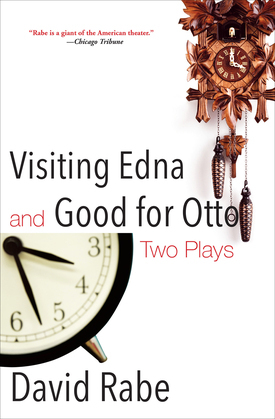 by David Rabe (Author)
Fiction Drama
Good for Otto, which premiered in October 2015 at the Gift Theater in Chicago, directed by Michael Patrick Thornton, is an unflinching portrayal of the world of mental illness and therapy. Drawing on material from Undoing Depression by Connecticut psychotherapist Richard O’Connor, it is a deeply moving look into the life of a number of patients trying to navigate personal trauma, including a profoundly troubled young girl, and one therapist, Dr. Michaels, who makes great efforts to help them, but is haunted by his own demons, and stymied by the financial obstacles of the American healthcare system.

Visiting Edna, which premiered in September 2016 at the Steppenwolf Theatre in Chicago, directed by Anna D. Shapiro, is a profound and stylistically dazzling portrayal of the bond between mother and son. As Edna, a woman in the last years of her life, faces a short future plagued by her many illnesses, from diabetes to arthritis to cancer, her son Andrew visits and they meet the emotional distance that has replaced the love they shared when he was a child. The question of how to communicate about death and their shared past is one that occupies them both as they attempt to navigate a future neither of them want to contemplate.

Taken together, the plays form a startling and thought-provoking vision of American society and cement Rabe’s place in the upper echelons of the canon of contemporary theater.