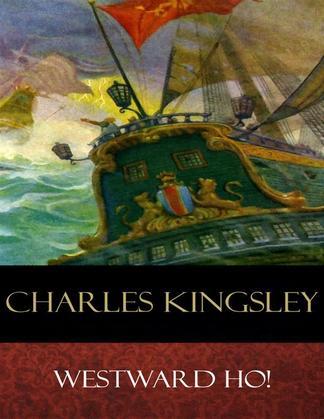 Westward Ho! by Charles Kingsley with illustrations by N. C. Wyeth, is an 1855 British historical novel by Charles Kingsley. The novel was based on the adventures of Elizabethan corsair Amyas Preston, who sets sail with Sir Francis Drake, Sir Walter Raleigh and other privateers to the New World, where they battle with the Spanish.

Set initially in Bideford in North Devon during the reign of Elizabeth I, Westward Ho! follows the adventures of Amyas Leigh, an unruly child who as a young man follows Francis Drake to sea. Amyas loves local beauty Rose Salterne, as does nearly everyone else; much of the novel involves the kidnap of Rose by a Spaniard.

Amyas spends time in the Caribbean coasts of Venezuela seeking gold, and eventually returns to England at the time of the Spanish Armada, finding his true love, the beautiful Indian maiden Ayacanora, in the process; yet fate had blundered and brought misfortune into Amyas's life, for not only had he been blinded by a freak bolt of lightning at sea, but he also loses his brother Frank Leigh and Rose Salterne, who were caught by the Spaniards and burnt at the stake by the Inquisition.

Westward Ho! is a historical novel which celebrates England's victories over Spain in the Elizabethan era. Although originally a political radical, Kingsley had by the 1850s become increasingly conservative and a strong supporter of British imperialism. The novel consistently emphasises the superiority of English mercantile values over those of the Spanish. Although originally written for adults, its mixture of patriotism, sentiment and romance deemed it suitable for children, and it became a firm favourite of children's literature.