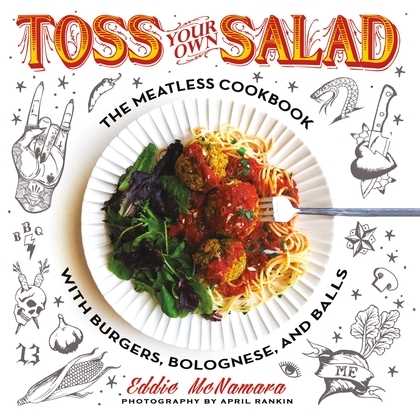 Toss Your Own Salad

"Eddie comes on strong, but behind the attitude there's an honest, stripped-down, back-to-basics approach to cooking real food. If you ever wanted to go from watching cooking shows to actually cooking, this is where you begin." - Amanda Cohen, author Dirt Candy: A Cookbook and chef/owner of the famous NYC vegetarian restaurant of the same name

Takeout food every night is great...for leaving you broke, bloated and praying for a national healthcare plan to deal with your fat ass self. Eddie McNamara wants to show you how to stop being a takeout junkie or a Gordon Ramsay wannabe who spends years learning complex knife skills you don't need. He also wants to show you how to pump up the flavor without resorting to using meat because ? really - who needs to eat more meat? As Eddie puts it, "Any schmuck can put bacon on something to make it delicious." He wanted to show people how easy it was to cook delicious meatless meals for themselves rather than gorging more fat and salt on a daily basis than you'd see in a bucket of KFC. He also wanted to show people that you don?t have to be Warren Buffett to eat well. As he puts it "Brokesters have cooked filling plant-based food since long before Mark Bittman moved to Berkeley in search of a perfectly ripe avocado." That's how his popular tumblr "Toss Your Own Salad" got started and now morphed into this awesome meatless cookbook that will get you to rock out over 100 recipes for dishes like The Green Inferno Salad, Dr. Devash's Shakshuka, Nihilistic Frittata and Penne Tikka Masala with an Eddie-curated soundtrack that spans the musical range from Metallica's "Creeping Death" to Gene Vincent's "Be-Bop-a-Lula". So, stop wasting your money. Do it yourself. Let Eddie McNamara show you how to Toss Your Own Salad.