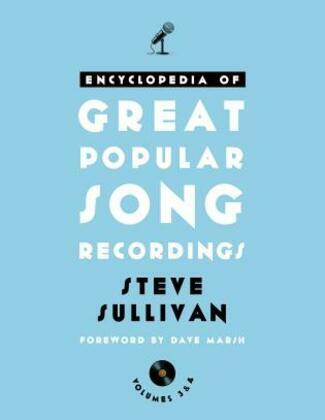 Volumes 3 and 4 of the The Encyclopedia of More Great Popular Song Recordings provides the stories behind approximately 1,700 more of the greatest song recordings in the history of the music industry, from 1890 to today. In this masterful survey, all genres of popular music are covered, from pop, rock, soul, and country to jazz, blues, classic vocals, hip-hop, folk, gospel, and ethnic/world music. Collectors will find detailed discographical data—recording dates, record numbers, Billboard chart data, and personnel—while music lovers will appreciate the detailed commentaries and deep research on the songs, their recording, and the artists. Readers who revel in pop cultural history will savor each chapter as it plunges deeply into key events—in music, society, and the world—from each era of the past 125 years.

Following in the wake of the first two volumes of his original Encyclopedia of Great Popular Song Recordings, this follow-up work covers not only more beloved classic performances in pop music history, but many lesser -known but exceptional recordings that—in the modern digital world of “long tail” listening, re-mastered recordings, and “lost but found” possibilities—Sullivan mines from modern recording history. The Encyclopedia of Great Popular Song Recordings, Volumes 3 and 4 lets the readers discover, and, through their playlist services, from such as iTunes toand Spotify, build a truly deepcomprehensive catalog of classic performances that deserve to be a part of every passionate music lover’s life.

Sullivan organizes songs in chronological order, starting in 1890 and continuing all the way throughto the present to include modern gems from June 2016. In each chapter, Sullivanhe immerses readers, era by era, in the popular music recordings of the time, noting key events that occurred at the time to painting a comprehensive picture in music history of each periodfor each song. Moreover, Sullivan includes for context bulleted lists noting key events that occurred during the song’s recording