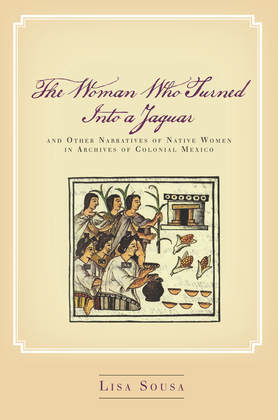 The Woman Who Turned Into a Jaguar, and Other Narratives of Native Women in Archives of Colonial Mexico

This book is an ambitious and wide-ranging social and cultural history of gender relations among indigenous peoples of New Spain, from the Spanish conquest through the first half of the eighteenth century. In this expansive account, Lisa Sousa focuses on four native groups in highland Mexico—the Nahua, Mixtec, Zapotec, and Mixe—and traces cross-cultural similarities and differences in the roles and status attributed to women in prehispanic and colonial Mesoamerica.
Sousa intricately renders the full complexity of women's life experiences in the household and community, from the significance of their names, age, and social standing, to their identities, ethnicities, family, dress, work, roles, sexuality, acts of resistance, and relationships with men and other women. Drawing on a rich collection of archival, textual, and pictorial sources, she traces the shifts in women's economic, political, and social standing to evaluate the influence of Spanish ideologies on native attitudes and practices around sex and gender in the first several generations after contact. Though catastrophic depopulation, economic pressures, and the imposition of Christianity slowly eroded indigenous women's status following the Spanish conquest, Sousa argues that gender relations nevertheless remained more complementary than patriarchal, with women maintaining a unique position across the first two centuries of colonial rule.