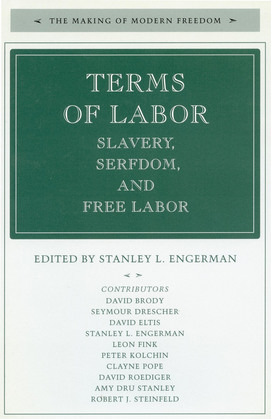 Throughout recorded history, labor to produce goods and services has been a central concern of society, and questions surrounding the terms of labor—the arrangements under which labor is made to produce and to divide its product with others—are of great significance for understanding the past and the emergence of the modern world.
For long periods, much of the world’s labor could be considered under the coercive control of systems of slavery or of serfdom, with relatively few workers laboring under terms of freedom, however defined. Slavery and serfdom were systems that controlled not only the terms of labor, but also the more general issues of political freedom. The nine chapters in this volume deal with the general issues of the causes and consequences of the rise of so-called free labor in Europe, the United States, and the Caribbean over the past four to five centuries, and point to the many complications and paradoxical aspects of this change.
The topics covered are European beliefs that rejected the enslavement of other Europeans but permitted the slavery of Africans (David Eltis), British abolitionism and the impact of emancipation in the British West Indies (Seymour Drescher), the consequences of the end of Russian serfdom (Peter Kolchin), the definition and nature of free labor as seen by nineteenth-century American workers (Leon Fink), the effects of changing legal and economic concepts of free labor (Robert J. Steinfeld), the antebellum American use of the metaphor of slavery (David Roediger), female dependent labor in the aftermath of American emancipation (Amy Dru Stanley), the contrast between individual and group actions in attempting to benefit individual laborers (David Brody), and the link between arguments concerning free labor and the actual outcomes for laborers in nineteenth-century America (Clayne Pope).