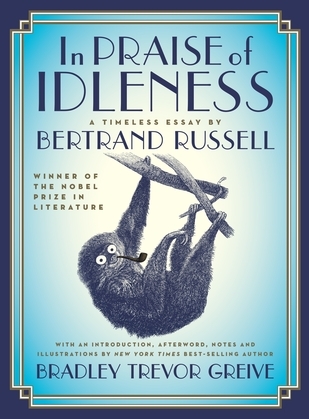 In Praise of Idleness

Bertrand Russell is considered ?the Voltaire of his time,? and Bradley Trevor Greive is considered one of the funniest people of his. Russell was a Nobel Laureate, and Greive is a New York Times bestselling author. Together, with Russell bringing the philosophy and Greive bringing the hilarious commentary, this book is a classic.

In his celebrated essay, In Praise of Idleness, Russell champions the seemingly incongruous notion that realizing our full potential?and thus enjoying the greatest possible success and happiness?is not accomplished by working harder or smarter, but through harnessing the extraordinary power of idleness.

Russell?s penetrating insights and exquisite turns of phrase feel as fresh and relevant today as when they were first written. Arguing that we can achieve far more by doing far less and that traditional wealth accumulation is a form of cultural and moral poverty, Russell demands greater depth from our age of abundant creativity and heralds the next wave of enlightened entrepreneurs.