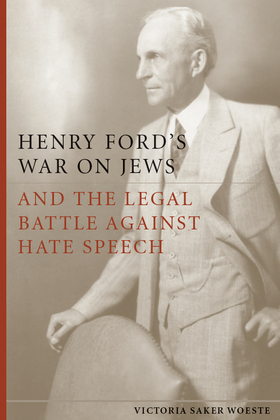 Henry Ford is remembered in American lore as the ultimate entrepreneur—the man who invented assembly-line manufacturing and made automobiles affordable. Largely forgotten is his side career as a publisher of antisemitic propaganda. This is the story of Ford's ownership of the Dearborn Independent, his involvement in the defamatory articles it ran, and the two Jewish lawyers, Aaron Sapiro and Louis Marshall, who each tried to stop Ford's war.
In 1927, the case of Sapiro v. Ford transfixed the nation. In order to end the embarrassing litigation, Ford apologized for the one thing he would never have lost on in court: the offense of hate speech.
Using never-before-discovered evidence from archives and private family collections, this study reveals the depth of Ford's involvement in every aspect of this case and explains why Jewish civil rights lawyers and religious leaders were deeply divided over how to handle Ford.