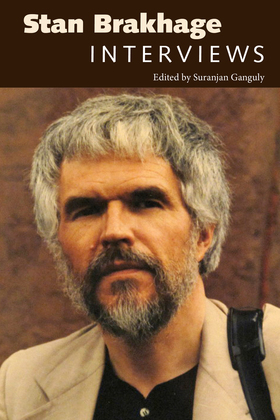 In this volume, editor Suranjan Ganguly collects eight of Stan Brakhage’s most important interviews in which the filmmaker describes his conceptual frameworks; his theories of vision and sound; the importance of poetry, music, and the visual arts in relation to his work; his concept of the muse; and the key influences on his art-making. In doing so, Brakhage (1933–2003) discusses some of his iconic films, such as Anticipation of the Night, Dog Star Man, Scenes from Under Childhood, Mothlight, and Text of Light.

One of the most innovative filmmakers in the history of experimental cinema, Brakhage made almost 350 films in his fifty-two-year-long career. These films include psychodramas, autobiography, Freudian trance films, birth films, song cycles, meditations on light, and hand-painted films, some of which range from nine seconds to over four hours in duration. Born in Kansas City, Missouri, he lived most of his life in the mountains of Colorado, teaching for twenty-one years in the film studies program at the University of Colorado, Boulder.

As a filmmaker, Brakhage’s life-long obsession with what he called an “adventure in perception” made him focus on the act of seeing itself, which he tried to capture on film in multiple ways both with and without his camera and by scratching and painting on film. Convinced that there is a primary level of cognition that precedes language, he wrote of the “untutored eye” with which children can access ineffable visual realities. Adults, who have lost such primal sight, can “retrain” their eyes by becoming conscious of what constitutes true vision and the different ways in which they daily perceive the world. Brakhage’s films experiment with such perceptions, manipulating visual and auditory experience in ways that continue to influence film today.