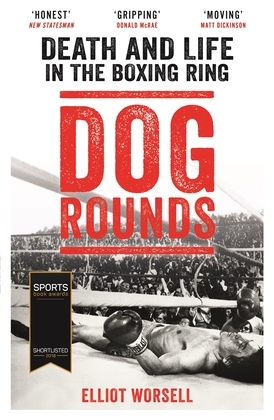 There's a kindness in beating a man badly, and that kindness is based on correctness,' Chris Eubank

March 2016: boxer Chris Eubank Jr punches his opponent, Nick Blackwell, into a coma. Blackwell dies momentarily, before being brought back to life. He remains in a coma for seven days. The boxing world is thrown into turmoil. In his corner, Junior's dad, Chris Sr., had been imploring his son to aim for the body. Was this a coach making a tactical change? Or was this a former boxer pleading with his son to show mercy? Twenty five years previously it had been Chris Sr. who had left his opponent Michael Watson with severe brain damage following a brutal encounter.

Elliot Worsell was ringside, reporting as part of Blackwell's camp with exclusive access to both dressing rooms. A lifelong boxing fan and experienced journalist, what Worsell saw left him questioning himself and his sport. Blackwell survived, but in Dog Rounds Worsell goes in search of the men who have killed in the ring. In spending time with these pariahs, as well as taking some of them back to the venue in which their tragedy occurred, Worsell uncovers a story that is raw, unflinching and extraordinary. Dog Rounds asks, should these men feel culpable when tragedy occurs in the ring? Should they carry the burden? Should they be apologetic? And it asks, what is our responsibility as spectators, cheerleaders and rubberneckers?