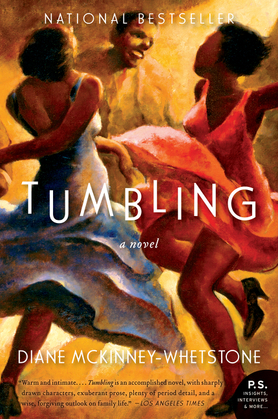 Tumbling is the beloved bestselling debut novel that launched the luminous career of Diane McKinney Whetstone, critically acclaimed author of Tempest Rising, Blues Dancing, Leaving Cecil Street, and Trading Dreams at Midnight. Writing in a style as accessible as Terry McMillan, yet with the literary touches of Toni Morrison, McKinney Whetstone’s Tumbling is a poignant, exquisitely rendered story of the ties that bind us and the secrets that keep us apart.

Noon and Herbie are deeply in love and living in a tightly knit African American neighborhood in South Philadelphia during the 1940s. But their marriage remains unconsummated because of a horrible incident in Noon's past, so each seeks comfort elsewhere: Noon in the warm acceptance of the neighborhood church; Herbie in the arms of Ethel, a jazz singer. Then one day an infant girl is left on their doorstep, and later Ethel blesses them with her five-year-old niece. Suddenly and unexpectedly a family, Herbie, Noon, and their two girls draw closer—until an outside threat reawakens a fire in Noon, causing her to rise up and fight to hold her family and her community together.