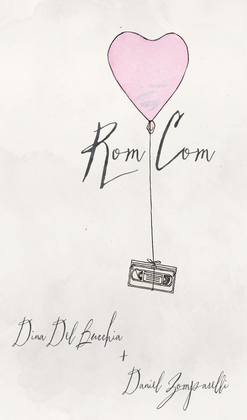 by Dina Del Bucchia (Author), Daniel Zomparelli (Author)
Buy for $19.95 Excerpt
Fiction Poetry Nonfiction Humor Form Limericks & verse Arts Film & video History & criticism
warning_amber
One or more licenses for this book have been acquired by your organisation details
At precisely the cultural moment you were hoping for, a dream team of smart, sexy, brunette, West Coast poets of Italian descent has passionately co-authored an intelligent collection of poetry that both celebrates and capsizes the romantic comedy.

From the origin of the genre (It Happened One Night) to its contemporary expressions (Love Actually), the poems in Rom Com trace the attempt to deconstruct as well as engage in dialogue with romantic comedy films and the pop culture, celebrities, and tropes that have come to be associated with them. These irreverent, playful, weird, and comedic poems come in a variety of forms, fully engaging in pop culture, without a judgmental tone. They see your frumpy expectations and raise you issues of sexuality, consent, sexism, homophobia, race, and class. They explore the highs and lows of romantic relationships and the expectations and realities of love, tackling real emotional worlds through the lens of film.

Two cool people wrote it. Dina Del Bucchia, the fashionable and voluptuous, is a woman on the go, brazenly hosting literary events and tweeting about otters and award shows. Daniel Zomparelli, the handsome and dashing, is a young, gay man-about-Vancouver who somehow also quietly edits (in chief) a semi-annual poetry journal. (Ship them all you want, fools.)

How to tell if you are compatible with this book: Are you equally versed in literature and pop culture? Are you a film-savvy fan of contemporary poetry? Are you an academic with interest in literature and cultural studies? Are you in general a cool, sad person? This book might just be the sassy best friend you’ve wanted.
Protection
Watermark
Format
EPUB
Publication date
December 16, 2015
Publisher
Talonbooks
Page count
128
ISBN
9780889229983
Paper ISBN
9780889229600
File size
3 MB