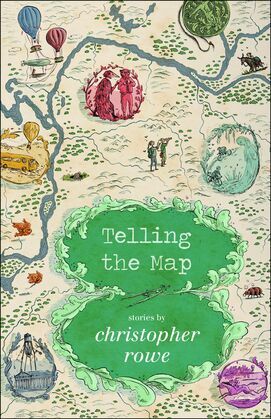 There are ten stories here including one readers have waited ten long years for: in new novel-la The Border State Rowe revisits the world of his much-lauded story The Voluntary State. Competitive cyclists twins Michael and Maggie have trained all their lives to race internationally. One thing holds them back: their mother who years before crossed the border … into Tennessee.

“Rowe’s stories are the kind of thing you want on a cold, winter’s night when the fire starts burning low. Terrific.”
—Justina Robson (Glorious Angels)

“As good as he is now, he’ll keep getting better. Read these excellent stories, and see what I mean.”—Jack Womack (Going, Going, Gone)

“Rowe’s work might remind you of that of Andy Duncan. Both exemplify an archetypically Southern viewpoint on life’s mysteries, a worldview that admits marvels in the most common of circumstances and narrates those unreal intrusions in a kind of downhome manner that belies real sophistication.”— Asimov’s

“As smooth and heady as good Kentucky bourbon.”— Locus

Christopher Rowe’s stories have been finalists for the Hugo, Nebula, World Fantasy, and Theodore Sturgeon awards, frequently reprinted, translated into a half-dozen languages, praised by the New York Times Book Review, and long listed in the Best American Short Stories. He holds an MFA from the Bluegrass Writer’s Studio. Rowe and his wife Gwenda Bond co-write the Supernormal Sleuthing Series for children, and reside in a hundred-year-old house in Lexington, Kentucky.