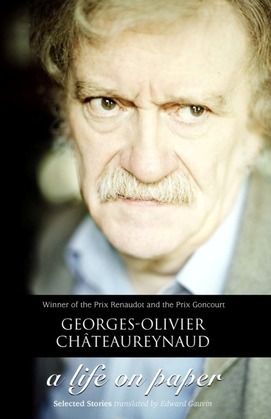 A Life on Paper

The celebrated career of Georges-Olivier Châteaureynaud is well known to readers of French literature. This comprehensive collection—the first to be translated into English—introduces a distinct and dynamic voice to the Anglophone world. In many ways, Châteaureynaud is France’s own Kurt Vonnegut, and his stories are as familiar as they are fantastic.

A Life on Paper presents characters who struggle to communicate across the boundaries of the living and the dead, the past and the present, the real and the more-than-real. A young husband struggles with self-doubt and an ungainly set of angel wings in “Icarus Saved from the Skies,” even as his wife encourages him to embrace his transformation. In the title story, a father’s obsession with his daughter leads him to keep her life captured in 93,284 unchanging photographs. While Châteaureynaud’s stories examine the diffidence and cruelty we are sometimes capable of, they also highlight the humanity in the strangest of us and our deep appreciation for the mysterious.

Georges-Olivier Châteaureynaud is the author of eight novels and almost one hundred short stories, and he is a recipient of the prestigious Prix Renaudot and the Bourse Goncourt de la nouvelle. His work has been translated into twelve languages.

Edward Gauvin has published Châteaureynaud’s work in AGNI Online, Conjunctions, Words Without Borders, The Café Irreal, and The Brooklyn Rail. The recipient of a residency from the Banff International Literary Translation Centre, he translates graphic novels for Tokyopop, First Second Books, and Archaia Studios Press.