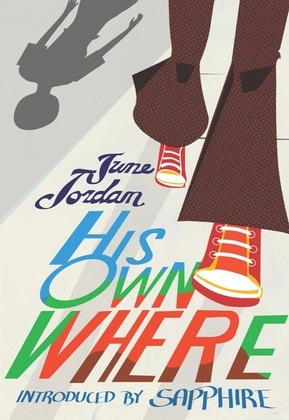 “This June Jordan treasure is a rare piece of fiction from one of America's most vital poets and political essayists—a tender story of young love in the face of generational opposition, a modern-day Romeo and Juliet that sings and sways.” —Walter Mosley

Nominated for a National Book Award in 1971, His Own Where is the story of Buddy, a fifteen-year-old boy whose world is spinning out of control. He meets Angela, whose angry parents accuse her of being "wild." When life falls apart for Buddy and his father, and when Angela is attacked at home, they take action to create their own way of staying alive in Brooklyn. In the process, the two find refuge in one another and learn that love is real and necessary. His Own Where was one of The New York Times' Most Outstanding Books and was on the American Library Association's list of Best Books in 1971.

June Jordan was a poet, essayist, journalist, dramatist, activist, and educator known for challenging oppression through her inspirational words and actions. She was the founder of Poetry for the People at the University of California, Berkeley, where she taught for many years. The author of over twenty books, her poetry is collected in Directed by Desire; her selected essays in Some of Us Did Not Die.

Sapphire is the author of American Dreams, Black Wings & Blind Angels, and Push, which was made into the 2009 award-winning motion picture Precious.