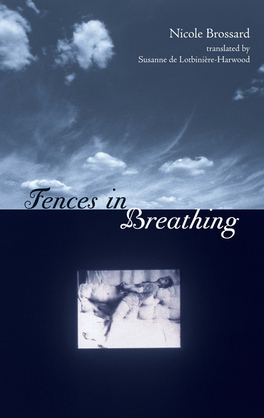 Invited to a quiet Swiss château by the enigmatic Tatiana Beaujeu Lehmann, Anne begins to slowly write a novel in a language that is not hers, a language that makes meaning foreign and keeps her alert to the world and its fiery horizon.

Will the strange intoxication that takes hold of her and her characters – sculptor Charles; his sister Kim, about to leave for the far north; and Laure Ravin, a lawyer obsessed with the Patriot Act – allow her to break through the darkness of the world?

Fences in Breathing, first published and critically lauded in French as La capture du sombre, and now brought into English by the celebrated translator Susanne de Lotbinière-Harwood, is a disquieting, dexterous and defiant missive, another triumph by one of North America's foremost practitioners of innovative writing.