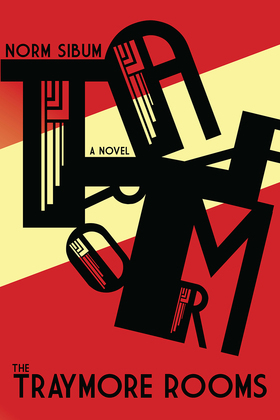 by Norm Sibum (Author)
Fiction Literary Humorous
A MILLIONS.COM MOST ANTICIPATED BOOK OF 2013
A HYPOALLERGIC FALL LITERARY RELEASE TO KNOW ABOUT

“Norm Sibum is not everyone's cup of tea ... instead of breathing air he inhales the exhaust of apocalyptic times.”—Books in Canada

A place: the Traymore Rooms, downtown Montreal, an old walk-up. Those who live there and drink at the nearby café form the heart of Traymorean society. Their number includes: Eggy, red-faced, West Virginian, a veteran of Korea; Eleanor R (not Eleanor Roosevelt); Dubois, French Canadian, optimist; Moonface, waitress-cum-Latin-scholar and sexpot inexpert; and, most recently, our hero Calhoun. A draft dodger and poetical type.

For a time all is life-as-usual: Calhoun argues with Eggy and Dubois, eats Eleanor’s cobblers, gossips of Moonface, muses on Virgil and the current President. With the arrival of a newcomer to Traymore, however, Calhoun’s thoughts grow fixated and dark. He comes to believe in the reality of evil. This woman breaks no laws and she inflicts no physical harm—yet for the citizens of Traymore, ex-pats and philosophers all, her presence becomes a vortex that draws them closer to the America they dread.

Intelligent and frighteningly absurd, with a voice as nimble as Gass’s and satire that pierces like Wallace’s, The Traymore Roomsis a sustained howl against libertarianism under George W. Bush.

Norm Sibum has been writing and publishing poetry for over thirty years. Born in Oberammergau in 1947, he grew up in Germany, Alaska, Utah, and Washington before moving to Vancouver in 1968. The Traymore Rooms is his first novel.