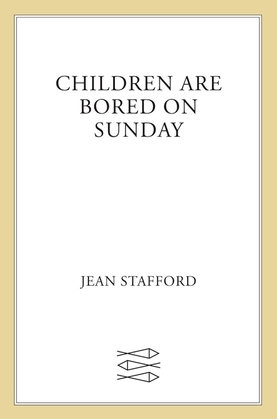 Children Are Bored on Sundays

"Probably the best young prose writer in the U.S.," as Time oncecalled her, Jean Stafford made a selection of her favorite among the stories she published in The New Yorker and elsewhere since 1944. Children Are Bored on Sunday displays at its height the mordant wit and sensibility which has distinguished Miss Stafford's work since her first successful novel, Boston Adventure, appeared in 1944.

The stories in this book vary in mood from the title piece, a satirical examination of avant-garde intellectual life in New York through the eyes of a self-styled "rube," to the quietly affecting novella "The Home Front," about a German doctor in an American defense plant town. The backgrounds of the stories are equally varied: one is set in the Virgin Islands, two in Germany, one in Oklahoma and one in Maine, and one - "The Interior Castle" - in the featureless ether-smelling world of a hospital where the heroine is recovering after a near-fatal accident. The central figure of one story is a fat girl who imagines herself to be twins and who cannot stop eating; in another we meet Jim Littlefield, an orphan Indian boy of 8, who has "come on the train barefoot all the way from Missouri." In "The Bleeding Heart" appears an invalid old lady whose speech has lost its verbs ("I her!" she cries), while her parrot, aged 48, has lost all speech, but the eternally reiterated, "Just a minute."

The versatile forms of these stories - ranging from satire to interior monologues, from pathos to grotesquerie - are carried out in a style so consistently controlled, so full of imaginative power and so alive to nuance both verbal and pictorial, that the collection takes on a compelliing unity in its very diversity, and will add to the already impressive reputation Miss Stafford's three novels have won her