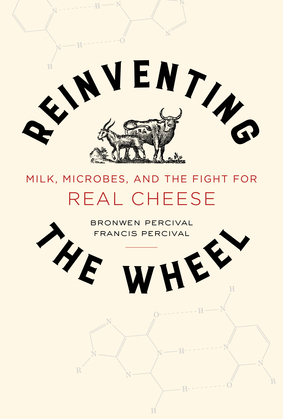 In little more than a century, industrial mindsets have altered the cheesemaking process at every level, from the bodies of the animals, to the microbial strains that sour the milk, to the way in which cheese itself is made. Single-farm cheeses that convey a sense of place have given way to the juggernaut of homogenous factory production, and the result has been a shift toward a cheese monoculture. But in recent years, scientific advances have allowed us to glimpse the resilience and complexity of naturally-evolved systems, and to realise what we have lost in our pursuit of greater control and higher yields. Additionally, new findings about microbes—key contributors to the flavour of cheese—challenge conventional wisdom about pasteurization.

In Reinventing the Wheel, Francis and Bronwen Percival lament the decline of farmhouse cheese, but they don't stop there: they show how cutting-edge scientific discoveries can help reverse this trend—and why it matters. It is a story that takes the reader on a global journey, from Vermont to Normandy to Australia, in the authors' quest to answer the question: What is real cheese?