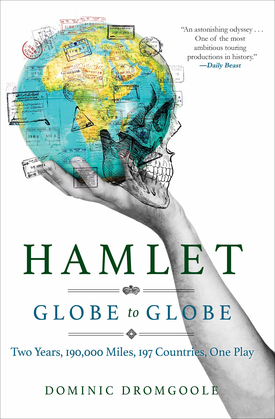 by Dominic Dromgoole (Author), Michael Gallagher (Translator)
Fiction Drama Non-Fiction History History by country Europe Great Britain Arts Performing arts Theater
Two years. 193,000 miles. 190 countries. One play. For the 450th anniversary of Shakespeare’s birth the Globe Theatre undertook an unparalleled journey, to take Hamlet to every country on the planet, to share this beloved play with the entire world. The tour was the brainchild of Dominic Dromgoole, artistic director of the Globe, and in Hamlet Globe to Globe, Dromgoole takes readers along with him.

From performing in sweltering deserts, ice-cold cathedrals, and heaving marketplaces, and despite food poisoning in Mexico, the threat of ambush in Somaliland, an Ebola epidemic in West Africa and political upheaval in Ukraine, the Globe’s players pushed on. Dromgoole shows us the world through the prism of Shakespeare—what the Danish prince means to the people of Sudan, the effect of Ophelia on the citizens of Costa Rica, and how a sixteenth-century play can touch the lives of Syrian refugees. And thanks to this incredible undertaking, Dromgoole uses the world to glean new insight into this masterpiece, exploring the play’s history, its meaning, and its pleasures. Hamlet Globe to Globe is a highly enjoyable book about an unprecedented theatrical adventure.