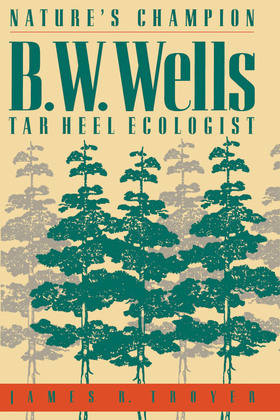 Through the pioneering efforts of ecologist B. W. Wells (1884-1978), thousands of North Carolinians learned to appreciate and protect the state's diverse plant life long before ecology and conservation became popular causes.

A keen observer of the natural landscape, Wells provided the first scientific descriptions in modern terms of the forces that shaped coastal communities, bogs and savannahs, the Carolina bays, pine forests, old fields, and mountain grassy balds. But the broader impact of his life lay in his championship and popularization of nature. Outside academic circles, he shared his knowledge through public lectures, articles, and lobbying efforts, and by teaching anyone who would listen. In 1932 he produced for his Tar Heel audience a revolutionary work on the plant ecology of the state, The Natural Gardens of North Carolina. Organized by habitat, this volume is still entertaining and instructive.

Wells received his Ph.D. in botany from the University of Chicago in 1917 and served as chair of the North Carolina State College botany department for thirty years. He was a memorable teacher and a significant force in the development of his academic institution.