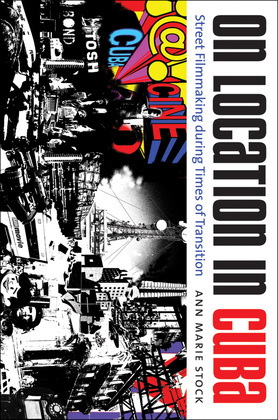 On Location in Cuba

The 1990s were a time of dramatic transformation for Cuba. With the collapse of its Cold War relationship with the Soviet Union, the island nation plummeted into an era of scarcity and uncertainty known as the Special Period, a time from which it emerged only slowly in the new century. On Location in Cuba views these pivotal decades through the lens of cinema. Ann Marie Stock conducted hundreds of interviews and conversations in Cuba to examine individual artists' lives and creative output--including film, video, and audiovisual art. She explores the impact of the Cold War's end, the economic crisis that ensued, and the decentralization of the state's political, economic, and cultural apparatus.

Stock focuses on what she calls Street Filmmaking--the production of emerging audiovisual artists who work outside the state film industry--to examine the island's transformation and changing notions of Cuban identity. Employing entrepreneurial approaches to producing art and to negotiating the exigencies of globalization, this younger generation of filmmakers offers fresh perspectives on what it means to be Cuban in an increasingly complex and connected world.