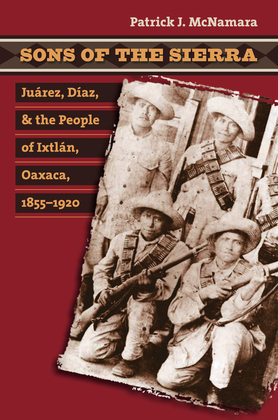 Sons of the Sierra

The period following Mexico's war with the United States in 1847 was characterized by violent conflicts, as liberal and conservative factions battled for control of the national government. The civil strife was particularly bloody in south central Mexico, including the southern state of Oaxaca. In Sons of the Sierra, Patrick McNamara explores events in the Oaxaca district of Ixtlan, where Zapotec Indians supported the liberal cause and sought to exercise influence over statewide and national politics.

Two Mexican presidents had direct ties to Ixtlan district: Benito Juarez, who served as Mexico's liberal president from 1858 to 1872, was born in the district, and Porfirio Diaz, president from 1876 to 1911, had led a National Guard battalion made up of Zapotec soldiers throughout the years of civil war. Paying close attention to the Zapotec people as they achieved greater influence, McNamara examines the political culture of Diaz's presidency and explores how Diaz, who became increasingly dictatorial over the course of his time in office, managed to stay in power for thirty-five years. McNamara reveals the weight of memory and storytelling as Ixtlan veterans and their families reminded government officials of their ties to both Juarez and Diaz. While Juarez remained a hero in their minds, Diaz came to represent the arrogance of Mexico City and the illegitimacy of the "Porfiriato" that ended with the 1910 revolution.