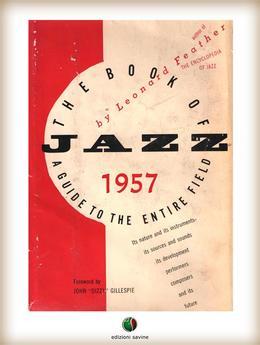 THE BOOK OF JAZZ - A Guide to the Entire Field

ORIGINAL DESCRIPTION (1957) - Jazz at last has matured to a full-fledged art, not only in this country, hut throughout the world as well. What has been known as an American folk music is now becoming an international form of expression, with artists in all countries constantly exchanging ideas and expanding the limits of their medium. No longer is it possible for the well-informed person, the person interested in the latest developments in the art world, to relegate jazz to the realm of simple, untutored, dance-hall music. Leonard Feather, author of the famous Encyclopedia of Jazz series, has written this hook for the widest possible audience—from the newcomer to the field who asks the basic, most-difficult-to-answer question, “What is jazz?,” to the jazz musician himself (one of whom recently asked, “Who is Bessie Smith?”). Here is a guide to jazz in all its phases: its nature, its sources, instruments, sounds, performers-and the future of jazz.A large part of the book consists of chapters devoted to the story of the role played by each instrument and its major performers. Each history begins with a non-technical discussion of the instrument itself: its function, its range, how it was first used and how it is now used in jazz. It goes on to tell about the artists themselves and how they developed the instrument, their special contribution and their relative importance in the entire world of jazz. From this unique approach emerges a clear and fascinating picture of jazz.The section titled “The Anatomy of Improvisation" presents for the first time actual musical illustrations of the jazz improvisations of 15 of the great soloists from Louis Armstrong and Benny Goodman to Art Tatum, Lester Young and Dizzy Gillespie. Each solo is studied in detail and with a clarity as enlightening to the listener as to the musician. These solos lead into a unique analysis of the nature of jazz —its harmony, rhythm and structure—and show how it has evolved from the music of the earliest days through ragtime, swing and hop to the latest innovations.In chapters devoted to the origins of jazz, the new evidence is bound to gain the attention of the entire jazz world. Drawing on conversations with musicians from various parts of the country, this section sheds new light on the particular places where jazz was first played. By exploring the sources, it reveals why jazz had its beginnings in the United States and what musical influences and social forces combined to produce this music.In a chapter entitled “Jazz and Bace,” the whole story of racial discrimination in jazz is presented in unprecedented detail. It tells of the early segregation in bands, of the gradual breaking down of the color barriers first by the musicians themselves and then by the public, and of the problems still to be resolved.To this illuminating guide, Leonard Feather brings his many years of experience in the jazz field both as critic and musician. For the person who has long sought a true guide to the enthralling world of jazz; for the student, the fan and the musician to whom jazz is an exciting territory, THE BOOK OF JAZZ provides the much-needed succinct story of this important new art form of the twentieth century.