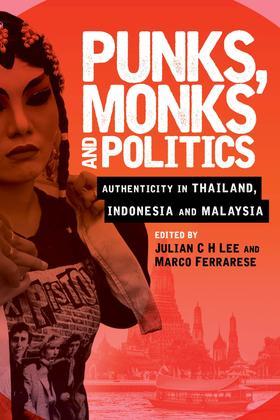 Authenticity is much sought after; being described as inauthentic is an insult or an embarrassment. Being authentic suggests that a given behaviour or performance is reflective of a ‘trueness’ or ‘genuineness’ to one’s identity. From a social science perspective there is sometimes scepticism expressed about the historical faithfulness of purported behaviours - such as when something is referred to as an ‘invented tradition. However, what can be overlooked in such criticisms is an array of sociological and existential dynamics that are at play when authenticity is striven for. Likewise able to be overlooked is where the location of that authenticity is ostensibly founded; sometimes the trueness of the behaviour is located in local traditions that reach back into time immemorial, sometimes in a universal human and shared sameness, and sometimes with regard to a global phenomenon.
Punks, Monks and Politics explores the idea of authenticity as enacted in Thailand, Indonesia and Malaysia. The collective contributions reveal the sometimes contradictory ways in which the dynamics of authenticity – its pursuit, it deployment, its politics – play out in very different contexts. Whether authenticity inheres in the local or the global, amongst the majority or within a subculture, on the outside of or within people, or in the past or the present, authenticity is nevertheless valued.