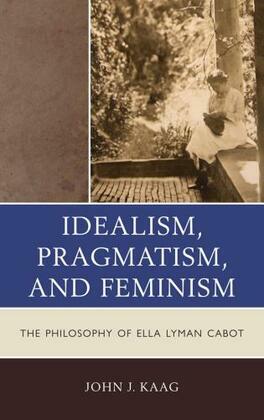 Idealism, Pragmatism, and Feminism provides an account of the life and writings of Ella Lyman Cabot (1866-1934), a woman who received formal training, but not formal recognition, in the field of classical American philosophy. It highlights the themes of idealism, pragmatism and feminism as they emerged in the course of career as an educational reformer and ethicist that spanned nearly four decades. Cabot's writings, developed in graduate seminars at Harvard and Radcliffe at the turn of the century complement, and in many cases anticipate, the thinking of the "fathers" of the American philosophical cannon: Charles Sanders Peirce, Josiah Royce, William James, and John Dewey. Her formal philosophical writing focuses on the concepts of growth, creativity, and the moral imagination—a fact that is especially interesting given that these concepts are developed by a woman who faced serious obstacles in her personal and intellectual development. Indeed, these concepts are not merely philosophical ideals, but practical tools that Ella Lyman Cabot used to negotiate the gender roles and intellectual marginalization that she faces at the turn of the century. The discipline of philosophy was very slow to incorporate the insights of women into its self-definition. An analysis of the writings of Ella Lyman Cabot reveals this point, but also the pointed ways in which she sought to express her genuinely creative insights.