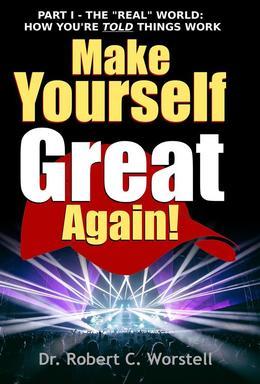 The One Reason For Success - and Failure - Lies Within You

Have you ever had a complete melt-down, a real failure of your world-view, where the world has gone to hell and stayed there?

Sad to tell you: it's your own damned fault.

What makes it worse is to find out that everything you ever needed to succeed is already programmed into you – and has been since you were born.

Then how did you get into that mess?

By blindly accepting and believing

- what people told you as you were raised, and

- in every school you went to,

- all the books you ever read,

- every movie you ever saw, or

- song you ever heard.

All those lessons and examples just helped you believe in somethingother than your own natural ability to succeed.

Most of what we are told these days are based on that bogus idea that the environment makes the individual. But there is a much longer tradition that the individual makes his own success in this world. Having built-in, pre-programmed abilities from birth is a far longer tradition, back to our verbal traditions and storytellers.

Unfortunately, we've all been trained since childhood to believe what we've been told, to not look closely at what we're told, to not think for ourselves, to not act on what we think will work better.

We've been mentally crippled into only living the same life as everyone else- going to work at a job we don't necessarily like, giving up on our hopes and dreams as "unrealistic", living out our lives like everyone else and hoping that retirement is paid for by somebody.

How you think consistently, the mental habits you've developed, are those you chose for yourself.

You don't have to live this nightmare. You are capable of much, much more. This book tells you how you've been told things work, and exposes the authorities you've been listening to are frauds, like the "wizard" behind the curtain.

This is what you've personally suspected all along.

This guide you you can be reading has a lot of my story, but it has more to the story of how the mental world we create really works.

It's been written for you to help you either recover from a recent crash, for help you make your belief-system more impervious to any future ones.

The third option is to help you embrace the crashes when they occur. That last one is for entrepreneurs, who take risks most of us wouldn't (but perhaps all of us should.)

You could say that life crashes happen due to “brittle” world views. The belief-systems which are more resilient can withstand far more than we would ever ask of them.

If you want one of those resilient belief-systems, you're going to have to work out how to strip down and rebuild and tune your own mental engine while you are using it to drive to work every day and taking the kids to their sports events or visiting their relatives on the weekend. You can't just get away with putting it in the shop and driving a loaner.

The trick to this is that we can change and improve our beliefs at any time.

We only have to decide to do it and then do it.

- Get introduced to the actual world, the one that the authorities have been hiding. It has it's own rules.

- Learn them and start to find the villains which have been keeping you down.

- Discover why only a handful each generation makes themselves great.

- See how the culture itself is rigged to keep you from ever climbing to your native-born success.

Get Your Copy Now.