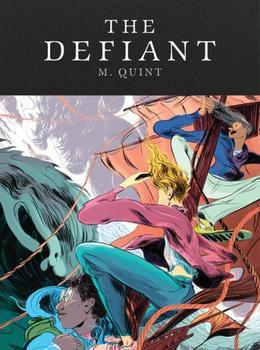 On a field trip to see famed privateer Francisco Ventana’s once-sunken ship, the Defiant, six kids from San Francisco’s Greenly School—a last-chance refuge for orphans, troublemakers, and misfits—find themselves stranded at the center of a storm unlike any other. By the time the clouds have cleared, and the strange pink flashes have faded from the sky, the Defiant is out on the open sea, San Francisco ablaze behind it. What follows is an adventure that will change the classmates' lives forever—a journey across a dangerous ocean in search of a new home, with only their instincts and each other to rely on. Can they master the ship? Can they work together, and defend themselves against the unexpected adversaries they encounter on the way? Will they ever find land? You’ll have to join their voyage to find out.

A remarkable debut in the tradition of Gulliver’s Travels and Lord of the Flies, The Defiant creates a world that’s all its own—thrilling and wholly original, filled with strange energies and superstitious survivors, and dozens of moments you won’t soon forget.