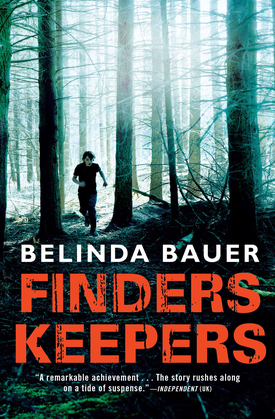 Exmoor Trilogy #3
by Belinda Bauer (Author)
Fiction Thrillers British literature
“Surprise, of course, is the most potent aspect of suspense. And Belinda Bauer knows exactly how to manipulate that element, right until the very end . . . She’s shown, not just how to keep surprise bubbling explosively away, but to do it with extraordinary dexterity, maturity and feeling . . . Brilliant.”—Daily Mirror (UK)

Finders Keepers is a spine-tingling, edge-of-your-seat thriller about an alarming spree of kidnappings in the southwest of England. The eight-year-old boy had vanished from the car and—as if by slick, sick magic—had been replaced by a note on the steering wheel: “You don’t love him.” At the height of summer a dark shadow falls across Exmoor, as children begin to disappear, with each disappearance marked only by a terse, accusatory note. There are no explanations, no ransom demands, and no hope. Policeman Jonas Holly (a character returning from Bauer’s first two novels) faces a precarious journey into the warped mind of the kidnapper if he’s to stand any chance of catching him. But—still reeling from a personal tragedy—is Jonas really up to the task? There are some who would say that, when it comes to being the first line of defense, Jonas Holly may be the last man to trust.

“The British countryside has never appeared so alien or so macabre.”—Sunday Times (UK)

“A remarkable achievement . . . The story rushes along on a tide of suspense.” —Independent (UK)