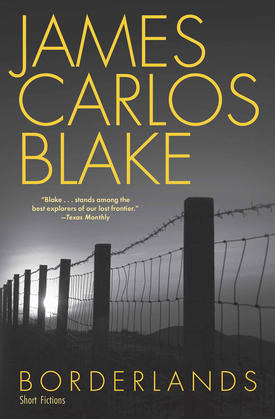 by James Carlos Blake (Author)
Fiction Short Stories Westerns Literary
The scrublands of South Texas, the warm coastland of the Gulf of Mexico, a cinderblock flophouse near the produce fields of South Florida: all are borderlands of mixed blood and spilled blood, of generations forged in fight, failure, and hope. In this extraordinary collection of short works, the masterful James Carlos Blake, author of In the Rogue Blood and the Wolfe family series of border noirs, journeys from the nineteenth-century Mexican frontier to the borderlands of today.

Borderlands begins with an introductory piece of memoir, called “The Outsider,” about Blake’s own straddling of worlds and identities. In the following eight haunting stories, we meet Don Sebastián Cabrillo Mayor Cortés y Mendoza, a powerful landowner reduced to howling at the moon from behind the bars of a mental institution; an illegal immigrant in Florida who must reckon with his emotional turmoil after being robbed by a fellow Mexican; a Texas woman orphaned by disease and desertion, making her way into a violent world of men; and many more who pass through the shadows of the borderlands. Bold, honest, and humane, these pieces represent some of the best writing from one of the most original and authentic voices in contemporary fiction.