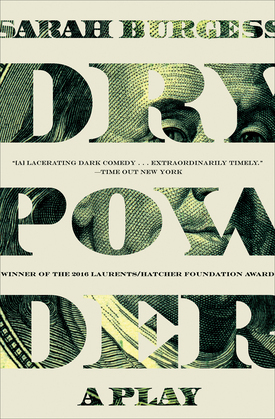 by Sarah Burgess (Author)
Fiction Drama
The same week his private equity firm forced massive layoffs at a national grocery chain, Rick threw himself an extravagant engagement party, setting off a publicity nightmare. Fortunately, Seth, one of Rick’s partners, has a win-win deal to invest in an American-made luggage company for a song and rescue his boss from a PR disaster. But Jenny, Seth’s counterpart, has an entirely different plan: to squeeze every last penny out of the company, no matter the consequences. The game is on in Sarah Burgess’ gripping, razor-sharp new play about the price of success and the real cost of getting the deal done.

Dry Powder was originally performed in March 2016 at Public Theater in New York, helmed by Hamilton director Thomas Kail and featuring an all-star cast. The play was an instant on-stage success and is the first production written by this preternaturally gifted playwright.