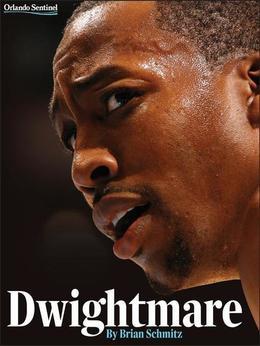 Dwightmare: Dwight Howard, the Orlando Magic, and the Season of Dysfunction

by Brian Schmitz (Author), Orlando Sentinel Staff (Author)
Excerpt
Nonfiction Nature, recreation and sports Sports & recreation Basketball Basketball Biography & autobiography Sports
warning_amber
One or more licenses for this book have been acquired by your organisation details
As the last seconds ticked down at Bankers Life Fieldhouse in Indianapolis, the most bizarre, tumultuous and cursed season in the 23-year history of the Orlando Magic mercifully came to an end. Coach Stan Van Gundy, known to keep coaching until the final buzzer, walked to the opposing bench with 10 seconds left in the lopsided playoff elimination game to congratulate young Frank Vogel, coach of the Indiana Pacers. Even more conspicuous than this rare mid-game conciliatory gesture from Van Gundy was the absence of the team's most recognizable, talented superstar: Dwight Howard.

Howard had always talked about winning a championship and bringing joy to Orlando. Despite this, the face of the franchise did not show his face throughout the playoffs, opting to undergo three weeks' worth of rehabilitation in the Los Angeles area following his season-ending back injury. This sour finale was an ignominious ending matched only by this ill-fated season's tumultuous beginning. Entering training camp after a prolonged off-season, Howard stunned the team and town by delivering a defiant trade request to Magic management. Even more devastating for Magic fans was that this request to be dealt to another team was vividly reminiscent of a similar event from a decade ago, when the Magic's last franchise star center, Shaquille O'Neal, abandoned Florida for the Los Angeles Lakers.

Howard and the Magic for so long seemed like the perfect match, and had even grown up together in many ways. The 2004 NBA draft brought together a skinny, devoutly religious teenage sensation and a squeaky-clean, family-run ownership down on its luck. Howard blossomed into a global superstar, turning the Magic into contenders. The city of Orlando embraced its new happy-go-lucky hero and fell in love with its basketball team again. They were once inseparable, as close as a player and a franchise could possibly be in today’s NBA.

What followed was one of the most bizarre reality shows to befall any professional sports team in memory, with Howard taking the Magic on a wild, emotional and confounding ride. There was presidential-like flip-flopping, a near trade, an 11th-hour reprieve, farcical front-office fumbling, YouTube moments, a drunk-dialing accusation, media shenanigans and one heart-attack scare, among other things.

And the soap opera is far from over. Follow the Orlando Sentinel's unmatched coverage of this ongoing saga with Dwightmare: Dwight Howard, the Orlando Magic, and the Season of Dysfunction. From the very beginning of Howard's career through the ouster of coach Stan Van Gundy and general manager Otis Smith, this book is the only place where the entirety of this saga's sordid details have been collected, analyzed, and boiled down to their bare facts. Dwightmare is a must read for Orlando Magic and basketball fans everywhere.
Format
EPUB
Protection
DRM Protected
Publication date
June 12, 2012
Publisher
Agate Digital
Page count
100
ISBN
9781572844193
Paper ISBN
9781572844193
2219558
item