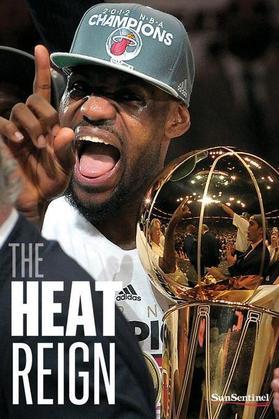 by South Florida Sun Sentinel Staff (Editor)
Excerpt
Nonfiction Nature, recreation and sports Sports & recreation Basketball Basketball Biography & autobiography Sports
warning_amber
One or more licenses for this book have been acquired by your organisation details
In Summer 2010, LeBron James took his talents to South Beach, bringing with him Chris Bosh to partner with Miami Heat superstar Dwyane Wade. The Big Three talked of winning multiple NBA championships and enormous expectations began to build—pressure that grew even stronger when the Heat lost the 2011 NBA Finals to the Dallas Mavericks.

There were rumblings about breaking up the team, or firing coach Erik Spoelstra, or both. New players joined the cast, and with James producing a league MVP season, the Heat rolled into the Eastern Conference finals despite injuries that limited the effectiveness of Bosh and Wade. Winning a championship would test the team like never before.

Down 3 games to 2 in the East finals after losing at home in Game 5, Miami faced elimination and a defining moment for James. A spectacular performance by James forced a Game 7 in Miami, where a victory sent the Heat on to face the Oklahoma City Thunder—and clash with superstar Kevin Durant.