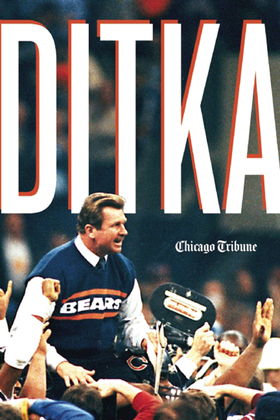 by Chicago Tribune Staff (Author)
Buy for $4.99 Excerpt
Nonfiction Nature, recreation and sports Sports & recreation Football History Football
warning_amber
One or more licenses for this book have been acquired by your organisation details
Composed of a carefully curated selection of archival Chicago Tribune columns and features, Ditka is a hard-hitting look at the Chicago Bears' legendary player and coach. Mike Ditka was drafted by the Bears as a tight end in 1961 and went on to earn Rookie of the Year honors, multiple Pro Bowl selections, and a 1963 championship ring with Chicago during his playing career.

Ditka retired in 1972 after stints with Philadelphia and Dallas (where he won Super Bowl VI), but he returned to Chicago as head coach in 1982. He became symbolic of the tough, hard-nosed, hyper-competitive style that defined the Bears through the 80s. Following the 1985 Bears' unforgettable season and Super Bowl victory, Ditka was enshrined as a hero in the minds of Bears fans everywhere.

Ditka will take readers on a fascinating and entertaining ride through the words of the award-winning Chicago Tribune journalists who covered "Iron Mike" for six decades. From his playing career to his coaching career, from personal triumphs to mishaps and scandals, Ditka is the ultimate fans' guide to the career and life of a Hall of Famer who came to define Chicago football in the modern age.
Format
EPUB
Protection
DRM Protected
Publication date
October 02, 2013
Publisher
Agate Digital
Page count
150
ISBN
9781572844674
Paper ISBN
9781572844674
File size
1 MB
2218975
item