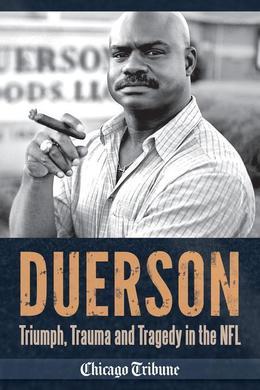 Duerson: Triumph, Trauma and Tragedy in the NFL

by Chicago Tribune Staff (Editor)
Excerpt
Nonfiction Biography & autobiography Sports Nature, recreation and sports Sports & recreation Football Social science Social work
warning_amber
One or more licenses for this book have been acquired by your organisation details
In many ways Dave Duerson was the prototypical success story for a professional athlete. After serving as a captain, team MVP, and All-American at Notre Dame, Duerson went on to become a four-time Pro Bowler in the NFL, winning Super Bowls with the legendary 1985 Chicago Bears and the 1990 New York Giants. Following his playing career, he made good use of his bachelor's degree in economics and his continued business education at Harvard by growing his food processing company into a $60 million enterprise. Duerson had a full family life, contributed to his community, served on the board of trustees for his alma mater, and even continued his involvement with football by helping the NFL Players Association (NFLPA) determine who should receive certain benefits after their playing careers ended. Then it all went wrong.

Ultimately, Dave Duerson committed suicide on February 17, 2011. They key to this tragic end may be his request that his brain be studied after his death; Duerson ended his life by shooting himself in the chest.

The tragedy of Duerson stems from the unseen emotional and physical trauma suffered by a deeply troubled man. Years of absorbing the grueling hits that have made the NFL America's most popular sport left Duerson with severe symptoms of memory loss, confusion, and depression, which would posthumously be diagnosed as the effects of chronic traumatic encephalopathy (CTE). Duerson was uncommonly successful after his football career ended, but his fortunes turned rapidly, and CTE could be pointed to as a factor. He lost both his wife and his business as he suffered through extreme bouts of depression. He was convicted for spousal abuse and endured bankruptcy filing. His role as gatekeeper between former NFL players and the benefit funds they sought from the NFLPA put him squarely at odds with many of his peers.

In the 2003, Duerson's mother--whom he considered his best friend--passed away on the day before Thanksgiving. Six years later, his father died on November 18. When Duerson's three siblings informed him that they would bury their father on November 28, Duerson's 49th birthday, he said, "I consider myself strong and all of that. I'd lived the so-called celebrity life, and they considered me the golden child of my family. But, you know, I think they missed the part where I'm a human." Duerson, unlike his siblings, experienced the bruising physical punishment of a sport the human body was not made to endure. The punishing hits that brought him glory and the adulation of fans left him with a damaged brain and a life in ruins.

The harshest truth of this tragedy is that Duerson is only one of many former athletes who are facing these conditions. Football players and hockey players, from the prep and professional levels, are all seeing some of their ranks diagnosed with this condition. The punishment athletes absorb has become more damaging than any of us could have imagined when these games were invented.

More than just the tragic story of one man, Duerson is a powerful and reminder that something must be done to protect the athletes competing in our professional and amateur sports arenas. The award-winning reporting of the Chicago Tribune that comprises Duerson brings these issues to the forefront of our national discussion on sports, entertainment, and health, while also bringing to light the dark truths of one man's struggle with what happens when these issues are ignored and unresolved.
Format
EPUB
Protection
DRM Protected
Publication date
January 29, 2013
Publisher
Agate Digital
Page count
50
ISBN
9781572844100
Paper ISBN
9781572844100
2218945
item