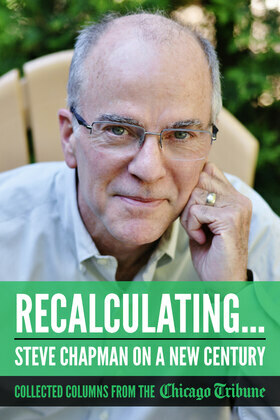 by Steve Chapman (Author)
Excerpt Buy for $9.99
warning_amber
One or more licenses for this book have been acquired by your organisation details
Steve Chapman is a nationally syndicated columnist known for his discerning commentary, wry humor, and optimism in the face of an ever-changing world. His newest book, Recalculating: Steve Chapman on a New Century, compiles the best of his popular twice-a-week Chicago Tribune column. It is the first such collection of his work, covering topics ranging from politics and pop culture to business and international affairs.

Comprising more than 220 columns published between 2000 and 2015, Recalculating: Steve Chapman on a New Century is a fascinating compendium of Chapman's matter-of-fact opinions on everything from sports to the Iraq War. His column, which is featured in over 50 newspapers, delivers straightforward insight into current events and pressing social issues. Known for both his libertarian views and his eschewing of dogmatic ideology, Chapman's columns are simultaneously skeptical and optimistic in their shrewd examination of our world.