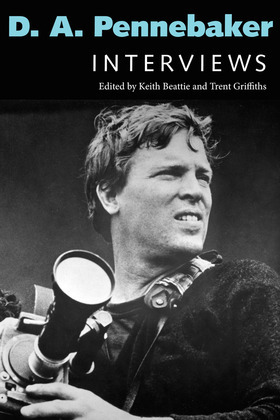 This wide-ranging and insightful collection of interviews with D. A. Pennebaker (b. 1925) spans the prolific career of this pioneer of observational cinema. From the 1950s to the present day, D. A. Pennebaker has made documentary films that have revealed the world of politics, celebrity culture, and the music industry. Following his early collaborations with Robert Drew on a number of works for television, his feature-length portrait of Bob Dylan on tour in England in 1965 (the landmark film Dont Look Back) established so-called direct cinema as a form capable of achieving broad theatrical release. With Monterey Pop, Pennebaker inaugurated the popular mode of rock concert film (or “rockumentary”), a style of filmmaking he has expanded on through a number of films, including Ziggy Stardust and the Spiders from Mars and Depeche Mode: 101.

Pennebaker has always regarded collaboration as an integral part of his filmmaking methods. His long-running collaboration with Richard Leacock and subsequently his work with Chris Hegedus have enriched his approach and, in the process, have instituted collaboration as a working practice integral to American direct cinema. His other collaborations, particularly those with Jean-Luc Godard and Norman Mailer, resulted in innovative combinations of observational techniques and fictional aesthetics. Such films as The War Room, which was about the 1992 Democratic primaries and was nominated for an Academy Award, and the 2009 Kings of Pastry continue to explore the capacities of observational documentary. In 2012 Pennebaker was the first documentary filmmaker to be awarded an Academy Honorary Award by the Academy of Motion Picture Arts and Sciences.