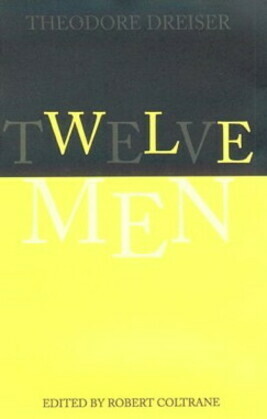 Although world-famous for his novels Sister Carrie and Jennie Gerhardt, Theodore Dreiser was also highly accomplished in journalism, autobiography, and travel writing. In 1919, having recently accepted the publishing contract of a new publisher, Boni and Liveright, Dreiser proposed to publish a "book of characters" that would collect twelve biographical sketches of individuals who were major influences on Dreiser, both as a man and as a writer. The resulting narratives combine the best attributes of the character sketch, the autobiography, and the short story into miniature masterpieces of prose.

The men profiled in Twelve Men are a diverse and colorful group: from Dreiser's equally famous brother, the songwriter Paul Dresser ("My Brother Paul"), to the entirely obscure railroad foreman Michael Burke ("The Mighty Rourke"), on whose work crew Dreiser had labored in 1903. The twelve narratives are compelling portraits of the men portrayed, but they also reveal many insights into Dreiser's own life and work. These factors elevate the significance of Twelve Men to a level consistent with other major works in the Dreiser canon.