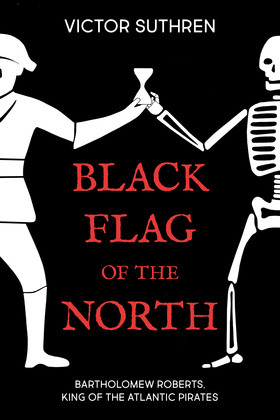 Black Flag of the North

He was tall, dark, and handsome, he wore fine velvets and lace, and in four tumultuous years he tore the guts out of the Atlantic. Bartholomew Roberts took over four hundred ships and rarely lost a fight at sea in his short, spectacular reign. He set the Atlantic aflame from the Grand Banks to Brazil, and by blood and fire won his reputation as the fearless and feared King of the Pirates.

Cast in a gripping narrative that combines historical accuracy with a novelist’s flowing prose, Black Flag of the North tells the story of Roberts’s dramatic life, from his boyhood in rural South Wales through his days at sea in the slave trade, culminating in the stunning events in Canada that opened his four-year piratical career, to his fiery end beneath British guns off West Africa.