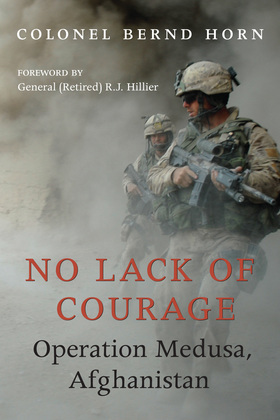 No Lack of Courage

by Bernd Horn (Author)
Buy for $9.99 Excerpt
Nonfiction History History by country Asia Central Asia United States Other Military
warning_amber
One or more licenses for this book have been acquired by your organisation details

No Lack of Courage is the story of the North Atlantic Treaty Organization’s Operation Medusa, the largely Canadian action in Afghanistan from 1 to 17 September 2006, to dislodge a heavily entrenched Taliban force in the Pashmul district of Afghanistans Kandahar Province. At stake, according to senior Afghan politicians and NATO military commanders, was nothing less than the very existence of the reconstituted state of Afghanistan, as well as the NATO alliance itself. In a bitterly fought conflict that lasted more than two weeks, Canadian, Afghan, and Coalition troops defeated the dug-in enemy forces and chased them from the Pashmul area.

In the end, the brunt of the fighting fell on the Canadians, and the operation that saved Afghanistan exacted a great cost. However, the battle also demonstrated that Canada had shed its peacekeeping mythology and was once more ready to commit troops deliberately to combat. Moreover, it revealed yet again that Canadian soldiers have no lack of courage.