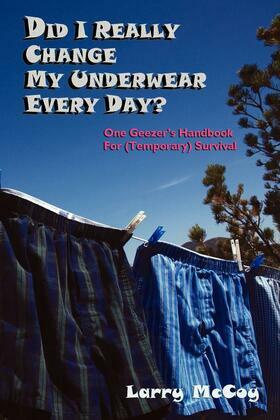 Did I Really Change My Underwear Every Day?

Recent retirees have a lot of adjustments to make, and we?re not talking only pant size here. This entertaining book on aging offers hilarious suggestions for handling some of life?s more daunting challenges--from prostate cancer to keeping fit, from overly complicated TV remotes to night driving. (McCoy wonders if other drivers in their 70s always see trees in the middle of the road after dark.) The author finds an amusing side to the problems of aging in this perceptive, on-the-mark collection of witty essays. There ARE ways of coping with growing older. As he points out, you don?t have much choice in the matter, so you might as well enjoy it. Humor pieces by McCoy have appeared in numerous newspapers, including at least two that are no longer in business. He would like to think there was no connection between their demise and his writing. ?Did I Really Change My Underwear Every Day?? is his first published book. He worked for more than 45 years as a news writer, editor, producer and manager in Chicago, Munich and New York. Many younger journalists have told him how much they learned watching him handle big stories. Even if they didn?t mean it, he enjoyed hearing it. A native of Frankfort, Indiana, McCoy is a graduate of Indiana University as is his wife, Irene, a retired copywriter and publicist. They live on Long Island in New York.