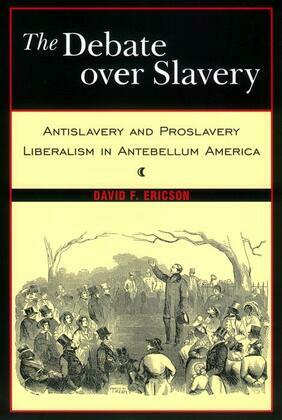 The Debate Over Slavery

Frederick Douglass and George Fitzhugh disagreed on virtually every major issue of the day. On slavery, women's rights, and the preservation of the Union their opinions were diametrically opposed. Where Douglass thundered against the evils of slavery, Fitzhugh counted its many alleged blessings in ways that would make modern readers cringe. What then could the leading abolitionist of the day and the most prominent southern proslavery intellectual possibly have in common? According to David F. Ericson, the answer is as surprising as it is simple; liberalism.

In The Debate Over Slavery David F. Ericson makes the controversial argument that despite their many ostensible differences, most Northern abolitionists and Southern defenders of slavery shared many common commitments: to liberal principles; to the nation; to the nation's special mission in history; and to secular progress. He analyzes, side-by-side, pro and antislavery thinkers such as Lydia Marie Child, Frederick Douglass, Wendell Phillips, Thomas R. Dew, and James Fitzhugh to demonstrate the links between their very different ideas and to show how, operating from liberal principles, they came to such radically different conclusions. His raises disturbing questions about liberalism that historians, philosophers, and political scientists cannot afford to ignore.