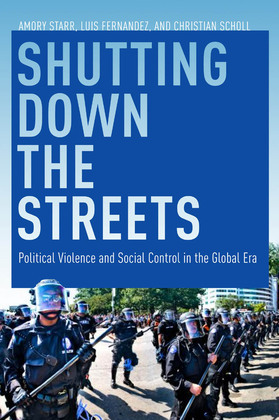 Shutting Down the Streets

Recently, a wall was built in eastern Germany. Made of steel and cement blocks, topped with razor barbed wire, and reinforced with video monitors and movement sensors, this wall was not put up to protect a prison or a military base, but rather to guard a three-day meeting of the finance ministers of the Group of Eight (G8). The wall manifested a level of security that is increasingly commonplace at meetings regarding the global economy. The authors of Shutting Down the Streets have directly observed and participated in more than 20 mass actions against global in North America and Europe, beginning with the watershed 1999 WTO meetings in Seattle and including the 2007 G8 protests in Heiligendamm. Shutting Down the Streets is the first book to conceptualize the social control of dissent in the era of alterglobalization. Based on direct observation of more than 20 global summits, the book demonstrates that social control is not only global, but also preemptive, and that it relegates dissent to the realm of criminality. The charge is insurrection, but the accused have no weapons. The authors document in detail how social control forecloses the spaces through which social movements nurture the development of dissent and effect disruptive challenges.