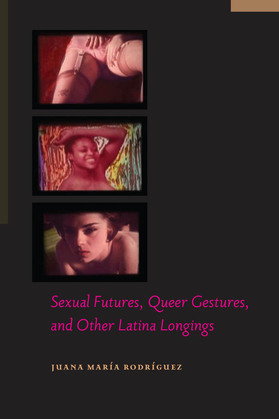 Sexual Futures, Queer Gestures and Other Latina Longings proposes
a theory of sexual politics that works in the interstices between radical queer
desires and the urgency of transforming public policy, between utopian longings
and everyday failures. Considering the ways in which bodily movement is
assigned cultural meaning, Juana María Rodríguez takes the stereotypes of the
hyperbolically gestural queer Latina femme body as a starting point from which
to discuss how gestures and forms of embodiment inform sexual pleasures and
practices in the social realm.

Centered
on the sexuality of racialized queer female subjects, the book’s varied
archive—which includes burlesque border crossings, daddy play, pornography,
sodomy laws, and sovereignty claims—seeks to bring to the fore alternative
sexual practices and machinations that exist outside the sightlines of
mainstream cosmopolitan gay male culture. Situating articulations of sexual
subjectivity between the interpretive poles of law and performance, Rodríguez
argues that forms of agency continually mediate among these various structures
of legibility—the rigid confines of the law and the imaginative possibilities
of the performative. She reads the strategies of Puerto Rican activists
working toward self-determination alongside sexual performances on stage, in
commercial pornography, in multi-media installations, on the dance floor, and
in the bedroom. Rodríguez examines not only how projections of racialized sex
erupt onto various discursive mediums but also how the confluence of racial and
gendered anxieties seeps into the gestures and utterances of sexual acts,
kinship structures, and activist practices.