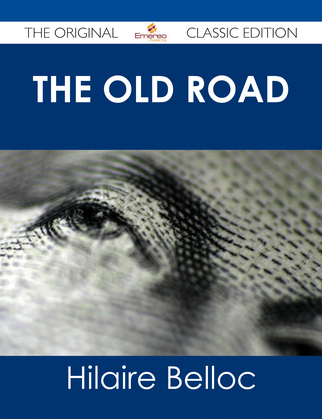 Finally available, a high quality book of the original classic edition of The Old Road. It was previously published by other bona fide publishers, and is now, after many years, back in print.

This is a new and freshly published edition of this culturally important work by Hilaire Belloc, which is now, at last, again available to you.

Get the PDF and EPUB NOW as well. Included in your purchase you have The Old Road in EPUB AND PDF format to read on any tablet, eReader, desktop, laptop or smartphone simultaneous - Get it NOW.

Enjoy this classic work today. These selected paragraphs distill the contents and give you a quick look inside The Old Road:

Look inside the book:

The sacredness which everywhere attaches to The Road has its sanction in all these uses, but especially in that antiquity from which the quality of things sacred is drawn: and with the mention of the word 'antiquity' I may explain another desire which led me to the study I have set down in this book: not only did I desire to follow a road most typical of all that roads have been for us in western Europe, but also to plunge right into the spirit of the oldest monument of the life men led on this island: I mean the oldest of which a continuous record remains.

...To put it the other way round, and give from west to east the primeval track from the centre of south England to the Straits of Dover, we may say that it would leave Stonehenge to enter Hampshire near Quarley Hill, leave Bury Hill Camp on the right, pass near Whitchurch, and so proceeding eastward, following the southern edge of the watershed, would enter Farnham by the line of 'Farnham Lane'; it would thence follow the southern side of the range of hills until it reached the sea above the Portus Lemanis—the inlet which covered the marshy plain below the present village Lympne.


...The answer is again, The Sea: the necessities and the accidents of the crossing of the Channel; and just as Canterbury was made by the peculiarity of the Straits, by the bastion of Kent, confusing and disturbing the rush of the narrow channel, and causing the complexity of meeting tides, so Winchester was made by the peculiar conditions under which the Channel can be passed at what I will call, for the purposes of this essay, the 'Second Crossing': that is, the passage from the jutting promontory of the Cotentin to the southern cape of the Isle of Wight, which stands so boldly out into the sea, and invites adventure from the French shore.

About Hilaire Belloc, the Author:

For Belloc, the common ground includes the unity and the omnipotence, personal nature, all-goodness, timelessness and providence of God, His creative power as the origin of all things, and His sustenance of all things by His power alone, the world of good spirits and angels and of evil spirits in war against God, with a chief evil spirit, the immortality of the soul and its responsibility for actions in this life, coupled with the doctrine of reward and punishment after death, the Day of Judgment with Christ as Judge, and the Lady Miriam (Mary) as the first among womenkind—and exactly which, in Belloc's view, identify it as a heresy: where Islam decisively diverges from Catholicism (and Christianity in general) is the 'denial of the Incarnation and all the sacramental life of the Church that followed from it'—with Islam regarding Jesus as a merely human Prophet.


...^ I, for my part, pretend to no certain conclusion in the matter… Of my own intimate acquaintance who were on the spot at Dreyfus' trial and competent to judge, most were for the innocence of Dreyfus: but the rest, fully competent also, were and are, convinced of his guilt… There are in England to-day two Englishmen whose wide knowledge of Europe and especially of Paris, and the French tongue and society, enable them to judge.