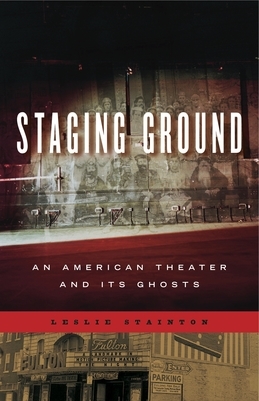 In this poignant and personal history of one of America’s oldest theaters, Leslie Stainton captures the story not just of an extraordinary building but of a nation’s tumultuous struggle to invent itself. Built in 1852 and in use ever since, the Fulton Theatre in Lancaster, Pennsylvania, is uniquely ghosted. Its foundations were once the walls of a colonial jail that in 1763 witnessed the massacre of the last surviving Conestoga Indians. Those same walls later served to incarcerate fugitive slaves. Staging Ground explores these tragic events and their enduring resonance in a building that later became a town hall, theater, and movie house—the site of minstrel shows, productions of Uncle Tom’s Cabin, oratory by the likes of Thaddeus Stevens and Mark Twain, performances by Buffalo Bill and his troupe of “Wild Indians,” Hollywood Westerns, and twenty-first-century musicals.

Interweaving past and present, private anecdote and public record, Stainton unfolds the story of this emblematic space, where for more than 250 years Americans scripted and rescripted their history. Staging Ground sheds light on issues that continue to form us as a people: the evolution of American culture and faith, the immigrant experience, the growth of cities, the emergence of women in art and society, the spread of advertising, the flowering of transportation and technology, and the abiding paradox of a nation founded on the principle of equality for “all men,” yet engaged in the slave trade and in the systematic oppression of the American Indian.