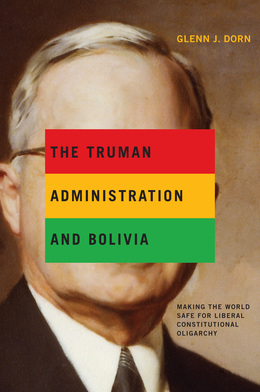 The Truman Administration and Bolivia

The United States emerged from World War II with generally good relations with the countries of Latin America and with the traditional Good Neighbor policy still largely intact. But it wasn’t too long before various overarching strategic and ideological priorities began to undermine those good relations as the Cold War came to exert its grip on U.S. policy formation and implementation. In The Truman Administration and Bolivia, Glenn Dorn tells the story of how the Truman administration allowed its strategic concerns for cheap and ready access to a crucial mineral resource, tin, to take precedence over further developing a positive relationship with Bolivia. This ultimately led to the economic conflict that provided a major impetus for the resistance that culminated in the Revolution of 1952—the most important revolutionary event in Latin America since the Mexican Revolution of 1910. The emergence of another revolutionary movement in Bolivia early in the millennium under Evo Morales makes this study of its Cold War predecessor an illuminating and timely exploration of the recurrent tensions between U.S. efforts to establish and dominate a liberal capitalist world order and the counterefforts of Latin American countries like Bolivia to forge their own destinies in the shadow of the “colossus of the north.”