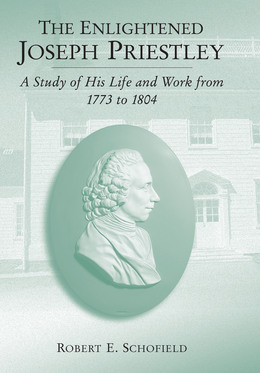 In The Enlightened Joseph Priestley Robert Schofield completes his two-volume biography of one of the great figures of the English Enlightenment. The first volume, published in 1997, covered the first forty years of Joseph Priestley’s life in England. In this second volume, Schofield surveys the mature years of Priestley, including the achievements that were to make him famous—the discovery of oxygen, the defenses of Unitarianism, and the political liberalism that characterized his later life. He also recounts Priestley’s flight to Pennsylvania in 1794 and the final years of his life spent along the Susquehanna in Northumberland. Together, the two volumes will stand as the standard biography of Priestley for years to come.

Joseph Priestley (1733–1804), a contemporary and friend of Benjamin Franklin and Thomas Jefferson, exceeded even these polymaths in the breadth of his curiosity and learning. Yet Priestley is often portrayed in negative terms, as a restless intellect, incapable of confining himself to any single task, without force or originality, and marked by hasty and superficial thought. In The Enlightened Joseph Priestley, he emerges as a man who was more than a lucky empiricist in science, more than a naive political liberal, more than an exhaustive compiler of superficial evidence in militant support of Unitarianism. In fact, he was learned in an extraordinary variety of subjects, from grammar, education, aesthetics, metaphysics, politics, and theology to natural philosophy. Priestley was, in fact, a man of the Enlightenment.